Skip to content
On Saturday, February 8th my sister and I attended Pittsburgh Ballet Theatre’s performance of Beauty and the Beast with her dance company.  The experience was eye-opening, fascinating, and definitely worthwhile.  The discussion we attended beforehand was quite informational, the scenery was phenomenal, and the talent of the dancers was incredible. 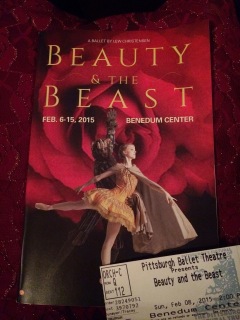 The ballet was choreographed by Lew Christenson, and the musical scores were taken from some of Tchaikovsky’s greatest works.  The dance numbers were knit together from ballets by well-known figures in the ballet world, Jiri Kylian, Mark Morris, and Jerome Robbins. According to Terrence Orr, the Artistic Director for the production, “This is perhaps the greatest mixed repertory PBT (Pittsburgh Ballet Theatre) has ever performed.”  The Saturday performance not only lived up to all of the exquisite hype, but exceeded my expectations.

Before the start of the ballet, a group of attendees, my sister, and I attended a talk-back session hosted by Orr.  He described in detail the length of time it requires to produce a ballet of this scale, and told personal stories of his experience dancing in the first run of the ballet back in 1958 in the San Francisco Ballet.  The talk was set up in front of a PBT class that was being taught, so Orr also described some of the teaching methods and dance moves that the students were performing.
After the discussion we found our seats and prepared ourselves for what was to come.  We soon entered a world of magical proportions, and fell in love with the epic and timeless tale.  A complex system of screens and panels, drapery and lighting soon transformed the once bland stage into a picturesque fairytale setting.  I was quite impressed with the hand-painted set pieces that allowed the audience to follow the movements from the forest, to the Enchanted Garden, to the Cottage, and to the Palace all throughout the two acts.
Principal dancers Alexandre Silva (Beast) and Julia Erickson (Beauty) enraptured the audience with their limitless talented dances.  One nearly forgot they were watching a live performance because each move was executed with such precision.  The choreography was brought to life even more by the ornate costumes, many of which had been purchased from the San Francisco Ballet Company and fully restored.  The company dancers provided depth to the story, and each is worthy of his/her personal recognition.
Pittsburgh Ballet Theatre’s Beauty and the Beast was quite the worthwhile and valuable experience.  While I must admit I previously feared boredom while watching, those anxieties quickly faded when the curtain opened.  Each piece of the production, the dancers, the music, the costumes, and the talk-back session, flowed seamlessly into another providing for a glorious experience visually and aurally.