Mrs. Connor, Jonathan Reese, Jake Arden and I traveled down to the “City of Brotherly Love” with fellow competitors and friends from Rockwood, Brandon Schmuck and Emily Barchey.  Their coach, Mrs. Picklo, also spent the weekend with us, and seeing as this was her last trip due to her retirement from coaching at the end of this year, the experience was particularly special for the Rockwood team.
After the long drive down, we checked into the Sheraton hotel in downtown Philly.  The most impressive aspect about the hotel was the view from our room, from which we could see staple attractions of the city, including the Art Museum (where the infamous Rocky montage was shot), City Hall, and other historical buildings.

For dinner, we stopped at a little place called “Rex’s,” where we enjoyed the best hot wings on the planet!  (That may be a slight exaggeration, but they were very good.)  Later that evening, we enjoyed the hotel’s swimming pool and rested up for a big day of sightseeing the following day!

After getting up and getting ready on Friday morning, we ventured out to the streets of Philly in search of the esteemed Reading Terminal Market Square.  After a taking a detour through Franklin Square and China Town, we arrived at the “Mecca” of food, as Brandon described it. 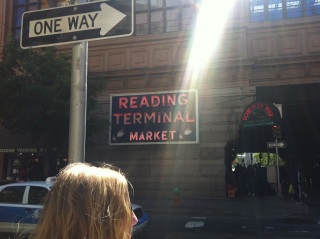 Inside, there was nearly two square blocks of shops, stands and restaurants where one could find any sort of food or drink they could think of.  We ate a delicious breakfast at a stand run by the Pennsylvania Dutch, who really know how to cook!

Although we could have wandered through the aisles of the market all day, we left and made our way down to the historic district of Philadelphia.  We claimed our tickets for the Independence Hall tour, and spent some time (and money) in the gift shop, where we all purchased matching pocket Constitutions!

As our tour was about to begin, we walked over to the security checkpoint for the building.  Although I find it kind of sad that each person has to be inspected before entering one of the most historical buildings in the country all because some with to spread destruction, it’s what has to happen.  Our tour started in a refurbished wing of the hall, where our park ranger guide described the history of the building and the many historical figures that walked through its’ doors.

We then went into the Supreme Court room of the hall, where the first organized court system in the budding country was founded.  Although most of the original furniture had been lost over the years due to natural disasters and thievery, we could still sense the importance of what happened in the room hundreds of years ago.

Then came the highlight of the tour, entering the most well-known room of the building, where the US Constitution was signed over 200 years ago.  The significance of what happened in that same room was overwhelming, and all in attendance were humbled by knowing that our Founding Fathers risked everything just to secure our freedoms that we all too often take for granted.

After Independence Hall, we went over to the home of the Liberty Bell.  We were all in awe of the great Bell, and one poor student was so excited to be in Philly that he dropped his phone and kicked it behind the five-inch-thick granite wall!  Although the park rangers worked diligently to rescue it, he unfortunately had to donate it to the Memorial.

We then walked a few blocks down to the Betsy Ross house, the former home of the seamstress of our great flag.  While the experience was interesting, we were a bit disappointed at the lack of historical artifacts at the location.

By then the weather had taken a turn for the worse, and we had to face a 20 minute walk back to the Sheraton in the windy, rainy 40 degree weather.  We arrived back at the hotel soaking wet, but exploring the city on foot was definitely worth it.

For dinner that evening we took a cab to “Jim’s Steaks” for a Philly staple, the cheesesteak.  Holding true to multiple recommendations, the cheesesteaks we had there were quite good, and if you ever find yourself in Philadelphia, I would highly recommend the restaurant.

We took the rest of the night off to just relax and prepare ourselves mentally for the 9 grueling hours of Student Congress debate that was waiting for us on Saturday.

We woke up before the sun the next morning and started our day off as Congressmen and women.  We were sworn in in the general meeting, and then broke off into our respective houses.  My house had approximately  20 students, all of whom were very passionate about the ideas that they were debating.  I made some new friends from places across the country, including New York, Arkansas, and New Orleans.  I took notice of how even though we all come from different places and may be more aware of domestic and foreign affairs than typical students, we all still act like teenagers.

After 3, 3 hours sessions of debate, (and only getting through 5 pieces of legislation) I was ready to call it a day!  Luckily, NCFL had planned an event for all of the tired, irritable competitors… the posting party!  Basically a giant dance, the posting party is the place to go to wait for results and hang out with friends after a long day of speaking.  The best part of the night is watching the throngs of people stampede when postings are released.  With over 3,000 students at the tournament, and nearly half at the party, trying to make your way through the crowd to see if you broke to the second day of competition is a feat reserved only for the brave!

Even though Jonathan, Brandon, Emily and I gave it our all, we unfortunately did not break to the second day.  We were okay with this realization though, because just advancing to Nationals is an accomplishment in itself.  We spent the rest of the night in our hotel room, hanging out and playing pranks on those who fell asleep first. 🙂

After finally going to bed at 3 in the morning, we woke up the next morning quite tired, but we still wanted to see more of the city.  Since Mrs. Picklo and Mrs. Connor had to go to the judge’s pool to see if they had to judge any more events, we decided to go on our own adventure and walk back to the Terminal Market.  We took a detour through the Philly “Love” park (the namesake for the tournament) and made it back to the Market without getting lost.  We enjoyed our last few hours in Philadelphia meandering around the Market and enjoying each other’s company.

Our great trip ended with a five hour drive back home to Shanksville.  Nationals 2013 was definitely a trip to remember, because it was spent with some of my best friends and I learned a lot about the world of Student Congress.  With any luck, we will make it back to the NCFL National Tournament next year, held in “The Windy City” of Chicago Illinois.  🙂